E.L. Shea, Inc. Construction Company was established on April 1, 1926, by Emmons
Lawrence Shea. After serving in WWI, Emmons worked on the construction of a variety of area
dams for his employer, H. Blaine Davis. At the age of 31, he decided the time was right to
establish his own construction company and purchased the construction division of H. Blaine
Davis, which had changed hands several times since its inception in the 1880s.

Following the great Ellsworth fire of 1933, Emmons L. Shea, Building Contractor entered
into a partnership with mason and concrete contractor Elbridge Milliken creating Milliken &
Shea, Inc. in order to tackle all of the work that lay ahead. Ellsworth City Hall, H.C. Austin, and the Masonic Hall are just a few of the buildings built after the fire by Milliken & Shea that still grace the downtown area. Other projects outside of Ellsworth included Bucksport High School in 1936, and an addition to the original building at the world-renowned Jackson Laboratory in 1938. After Milliken’s passing in 1938, the company again became Emmons L. Shea, Building Contractor, until its incorporation as E.L. Shea, Inc. in 1966. 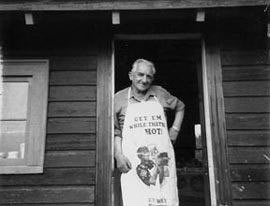 Emmons at his camp.

In 1940, Robert, Emmons’s eldest son, joined the company. Bob, as he was known,
became one of the finest craftsmen in the area. Bob’s projects ranged from the Dr. C.C.
Knowlton School in Ellsworth and the Wilbur Theater in Eastport, to many fine custom homes.
Philip Shea, Emmons’s middle son came aboard in 1950. Phil was responsible for much of the
estimating and bookkeeping while also heading up projects.

Continuing the family tradition, Kenneth and Stephen Shea, Bob’s sons, joined the
business in the 1960’s and Ken continues to still work there today. Ken’s son, Robert E. Shea II, joined the company in 2002, serving as a project manager and design engineer. Although much has changed since Emmons first began in 1926, the focus of the company has remained remarkably consistent. With a strong contingent of talented and dedicated employees, E.L. Shea continues its tradition of quality construction of both residential and commercial buildings.